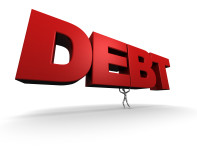 According to a recent published report purported to come from Nigeria Central Bank but carried by ThisDay, a Nigerian newspaper, some prominent Nigerians are known to be heavily indebted to some banks. Debt is never a crime but refusing to pay is. Some of the prominent names are:

If former Nigeria Power Minister Mr. Barth Nnaji, is indebted to a bank, how come he was confirmed as a minister? Did President Jonathan know about his debt situation but still nominated him for appointment? Did Nigeria’s Senate raise concern in the confirmation hearing? Are nominees requested to disclose their financial situation, assets and liabilities?

In US, it would be hard for one to gain high government appointment if they are heavily indebted to a financial institution and defaulted. Lying on a loan application is grounds for serious felony prosecution. A former Texas Attorney, General Dan Morales, went to jail for providing false information on a loan application. Such will never happen in Nigeria. The only crime one does not commit in Nigeria is the one they have not decided to pursue/commit. There is hardly consequence for bad behavior in Nigeria. One can get away with virtually anything, especially if they are highly placed.

Being in debt is no crime. It is refusing to pay or trying to walk away from the debt obligation that is a serious breach of public trust and good faith. With the debt situation, could it be reason Mr. Nnaji was alleged to have tried to get a former business associate deal with the Power ministry, but he Nnaji claimed he knew nothing about the business associate bid for a contract? It is likely a heavily indebted ministerial appointee will seek ways to use their position to pay back loans.

Nigerian banks make loans on personality as opposed to soundness of projects or their business models. No wonder, Nigerian bank debts are shunned by foreign investors because there is hardly worthy collateral on which the debts are secured. Given the low standards of assets valuation, recovering any reasonable loss from pledged assets is less than 10%. In a recent ranking of financial institutions using outstanding loans matrix, Nigerian banks ranked lowest of the bottom.

The ranking considered the quality of the debt portfolios, worth of the collateral pledged, business model of the borrower and their business sector, among other factors. Often the biggest asset[s] the borrowers offer up as collateral are their homes/houses. These assets are often over-inflated by estate valuers/surveyors to please and appease the borrowers for a promise of something. The Ethical standards of Nigerian estate surveyors/valuers mirrors the general Nigerian populace ethos/ethics – less than 1% desirability index.

Nigerian Institution of Estate Surveyors and Valuers – NIESV, the ultimate authority for valuation of assets in Nigeria, hardly conducts courses in Ethics, Code of Conduct and Conflict of Interest for practitioners. Without enforcement mechanism at the state or federal to ensure public trust is protected in the practice of any profession in Nigeria, the abuse and fraud levels are much higher. Professional bodies in Nigeria are self-policing entities lacking capacity and enforcement resources, a situation further compounded by tribal sentiments and nepotism. It is an open market for quacks and so called professionals alike; all trying to undue each other while the public trust is seriously eroded.

There is no obvious conflict of interest consideration when doing a property valuation for a client. Fees are often based on a percentage of value reached; an undue incentive for concluding value high, worthless than the paper it is written on. The typical conclusion of capital value [market value as in the case of US], ends with: ‘In my professional opinion’, the value is so and so.’ It is an opinion all right, but such opinion taken under the microscope, is fraught with poor judgment, lousy analytical standards and paucity of market data, similar to what one may obtain from a voo-doo doctor – nonsense. In the absence of critical review and enforcement committee to reign in errant practitioners, professional practice in Nigeria, is an opportunity to make it big. The valuation profession is no exception.

While I worked as an Estate Surveyor/Valuer in Nigeria before leaving for US, any time I went out to do a valuation assignment, I knew another pay day was likely. The borrowers did everything and anything to earn my support. And often, I refused their overtures.

If banking is to make sense in Nigeria, valuers and accountants must be held in high standards and be prosecuted for blatant practice when aiding and abetting fraud on what is considered ‘federally insured financial institution’ banks insured by Nigeria Deposit Insurance Corporation – NDIC. The Nigerian tax payers are always left holding empty bags as they bail out the banks. Practitioners should be meant to carry at least general liability coverage for errors and omission, to indemnify any financial institution for any loss due to their reckless conduct. If there is obvious fraud, the practitioner should be prosecuted.

No Nigerian estate valuer/surveyor has ever gone to jail for providing worthless valuation report, which aided in obtaining over-inflated loan. It is about time such ‘air’ professionals are locked up and their assets seized when proven they colluded with a borrower to inflate value and in turn defraud a bank. No bank fraud as it relates to assets secured on a landed property collateral can happen without an opinion of value rendered by an estate surveyors/valuer. If that is the case and Nigeria has seen many of these bank failures/frauds, costing and eroding the confidence in banking, how come no valuer/surveyor has gone to jail? Intrigue and under the table deals never cease to be the order of the day in dear native land Nigeria.

As for the debtors, banning them from borrowing is not enough. Their assets should be seized and sold. Given that Nigerian banks are shoddy and shady in their deals with borrowers, sanitizing the system is long overdue. It is often normal business for lending officers to get kick-backs from the loan proceeds. What the borrowers should now do is expose the kick-back takers and show how such chunk out of the loan amount affected the borrower/loan performance. The borrowers should seek immunity from prosecution and serve as federal witnesses to expose the lending officers’ practices.

The blame should not be heaped on the borrowers alone. The lenders have a hand in the fraud and default situation. It is very unlikely to borrow in Nigeria without the bank officials not getting something in return. Now is the time to call their bluff and expose all the shenanigans. If the lending institutions are to be sanitized, the banking officers must hold their end of the lending+borrowing culture and be above board.

For Mr. Barth Nnaji, it is an opportunity to regain some lost ground since resigning or being asked to resign from the Power Minister. By embarking on exposing the bank-lending system for what it is – SHODDY and CORRUPT, Nigerians may see him as a hero. But there again, he may go like former Cross River Governor Donald Duke, who spoke up against corruption in PDP and the political system, and has since fallen out of favor.

Nigerians do not like whistle blowers – because present participants and future hopefuls in the corrupt system see such as stopping them from their turn and those entrenched in it, consider it betrayal of some oath of secrecy. Current practices, are reminders of the early 1970s charges and counter chanrges of massive corruption under Gowon regime – played out in the open by Ministers Joseph Tarka and Godwin Daboh, with ensued slang then: – You ‘Tarka’ me and I ‘Daboh’ you.