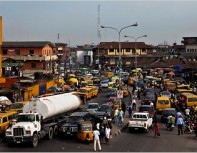 Nigeria can be a sad and sickening place. By 2014, Nigeria will have existed for 100 years as a corporeal entity. However, with 7 years away from becoming a century old nation, the physical aspect of Nigeria, its politics, resource management, people, their culture and attitudes, still remain ingrained in tertiary terms, primitive overtures and is overly displeasing.

In 1865, Washington DC had no electricity. But in 1894, Ijora Power Station – Lagos, one of the first in West Africa, was established. In more than 100 years that electricity has made its presence in Nigeria, the country’s leadership cannot boast of 20 percent electricity to its more than 130 million folks.

In the 50s, Bank of America Nigeria (now defunct Savannah Bank of Nigeria) was fashionable in Nigeria before it was a household name in US, yet no Nigeria Bank has an equity contribution of $1 billion; the treshold used to gauge the strengthen of a bank. During the early 90s, when some managing directors of Nigeria Banks complained to the  then Head of State IBB about lack of representation on the funding and financing of LGN – Liquified Natural Gas plant, IBB agreed to set aside 10 percent of the plant cost to be financed by Nigerian banks. But lo and behold, a consortium of the banks could not come up with the $1.2 billion represented by the mere 10 percent set aside. Today still, no Nigeria Bank finances exploration of oil/gas, despite Federal Government of Nigeria having earned nearly a trillion dollars in oil/gas revenue. In fact, no Nigeria bank has an energy lending unit to help further the oil and gas sector. Most annoying, some banking laws in Nigeria preceded US banking laws because Nigeria got its banking footing from UK via Barclays and Standard, two of the world’s leading financial institutions.

It was due to the attraction Nigeria had in the 50s that the Bank of America, then a mere neighborhood financial institution in California sought a foothold in Nigeria and remained until the 70s when the Indigenization Decree nationalized its existence, and it became Savannah Bank of Nigeria. In fact, Bank of America still has unredeemed shares in Savannah Bank and a few years old ago, Senator Nwobodo sought my help to see whether BofA would take a look at Nigeria. It went nowhere.

In 1985, I paid N768, an equivalent of nearly $1,280 to fly from Nigeria to Dallas. Naira was exchanging at 60 kobo to the Dollar. Today the Naira has lost both its luster and as well as backing (although nothing backed it then). Today, Naira exchanges at N135 to the Dollar. If one were to calculate the percentage change, the resulting decimal points will be so huge that the calculator will spin out ‘E-E-E-E-E-E-E’ – an indication of extended error. If in less than 20 years Naira had a free fall and today’s Nigeria government boasts of having more than $20 billion in foreign reserve, the Naira has not made any significant move against the Shilling or the Dollar. The condition of South Korea after its war was worse than Nigeria after the civil war that ended in 1970. Today, South Korea and China, have more that a trillion dollars in foreign reserve the first time in the history of the world financial trend that any nation[s] achieved such a fate. Both countries in the 70s produced nothing and whatever they did produce, was laughed at. But we now know their stories.

In the 80s’ while nothing backed the Naira, the spirit of the people, their desire to be self sustaining and develop Nigeria as a true giant of Africa and an emerging developing nation, spurred foreign direct investment. Note in the late 70s to early 80s, most major auto-makers had an auto-assembly plant in Nigeria, and Nigeria showed its technological prowess in the auto-making sector by launching Igalla; a Volkswagen partnership with VON – Volkswagen of Nigeria. The Ajaokuta Steel Plant was the envy of the world and many super powers sought contracts and stakes in the plant. Nigeria was about to pop. Today, Ajaokuta lies dormant and the satellite town developed to support the staff, a well master planned community that was a prelude to Abuja, is instead lived in by rats and rodents, and covered by native vegetation. I was there a few years ago and uncontrollably cried sentimentally.

Can one imagine a Nigeria that remained true to its self defined path and route, made the required sacrifice, committed to achieving what it set out to do then? By now, leaving Nigeria for any other place would have been an option but not due to deprivation, starvation, unruly conducts and practices of the leadership. Nigeria may be OVERCOMING. That needs to change to where Nigeria must PREVAIL, and join the comity of nations as a credible, respected and admired member ready at any time to help enhance and restore the dignity of its people and mankind; as is depicted by the motto of University of Nigeria. As the most populous black nation in the world, nothing short of a successful nation to help restore and enhance the image of the black person, will do Nigeria any good.

Lessons can be learned and improvements made. But longevity does not mean things will get better unless concrete and concerted efforts are made to improve things. A monkey does not go overseas and come home a dog: No matter the cloning. Until the likes that currently man the fort for Nigeria are replaced by what the US Marines may consider ‘a few good men and women’, Nigeria will remain what it was and is. Nigeria may not in a million years see the sort of light and development a nation can enjoy by working hard and placing its men and women in positions to make positive difference.

What’s next? Nigerians should get involved positively by committing themselves to espousing values and virtues to help unleash the latent strength in Nigeria. In doing so, Nigerians must nurture institutions that will help make Nigeria’s collective existence a thing of pride and honor.