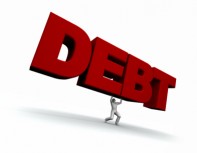 As a low interest student taking accounting to meet minimum requirements for my core subject, I went away with one thing from accounting: Brought Forward and or Carried Forward. For those that are imbibed and breathe the accounting subject, they can relate to what I mean.

The terms Brought Forward and or Balance Carried Forward mean the same to me and I use them in this piece to denote public policy issue that deals with State and or Sovereign Debt. The national debt is always carried forward or brought forward regardless of the conditions that saw and or encouraged its existence.

What is going on in Iraq is reshaping and bringing different approach and thinking to national debt debate. The recent appointment of Jim Baker by President Bush to review Iraqi’s national debt is very interesting. The charge is to collect, consider, converge and conclude on what needs to happen to Iraqi’s amounting debt in the region of $120 billion left behind by an administration and a regime that tortured its people and imposed on them debts that they have no clue what it was all for except to oppress them. That is the case with many developing nations. How come no one ever considered reviewing such debts before now except leave these nations at the mercy and machinations of IMF and World Bank?

Nations sought debt relief/forgiveness and regardless of whether the administration/regime that borrowed the money was duly elected or was imposed. The US, UN, IMF, World Bank and other donor countries and organizations responded by providing these debt relief seeking countries a mile long list of reform issues and structural adjustment programs that need to be met before due and favorable considerations are given. Knowing how challenging these requirements are, many such nations instead went back to business as usual or simply ignored them.

Although many nations took the bite and did something, the question is at what point is national debt legitimate and then carried forward and or brought forward?

No expert has been able to dwell on or come up with an all-suiting-answer. But many are beginning to question what their national liability is to debt they neither authorized nor used to make their living condition better. In the early days of US, Benjamin Franklin, father of the treasury and proponent of public debt, encouraged US to pay back its debt to France. That gesture saw debt as viable public finance tool and one that could be used to prove credibility. Debt in itself is not bad because its prudent management results in delivery of monetary resources that produces goods and services to ensure its pay back.

For developing nations not rooted in good and sound public finance, they see windfalls and opportunities to amass personal wealth and when the people appear to complain, the regimes engage in oppressive conducts to suppress. Then the other compelling question is, why must developed nations lend money to oppressive regimes that use the borrowed money to suppress their people when their intelligence reports point to the obvious? It is a control factor. When one owes, one is controlled!

In the personal finance world, should a creditor continue to advance credit to a bankrupt individual? Since oppressive regimes are at best bankrupt, why must they enjoy credit facility from lending and donor agencies? In the law of contract and public service, when parties engage in conducts that are illegal, their action becomes VOID and or VOIDABLE. The developed nations cannot claim ignorance and seek repayment because they knowingly engaged in conducts that straightened and empowered these regimes that oppressed.

Having said this, what is Nigeria’s position on many of its debts?

Nigeria is one of the countries that has appeared at and appealed to the Paris Club and other agencies seeking debt relief and forgiveness. But would anyone say that Nigeria regimes and or administrations have been prudent in managing national and or sovereign debts? Why was the money borrowed and what positive dividends have come out of such borrowing? Are developed nations knowingly offering strangulating financial resources knowing that they are abused? Is this a way for them to continue their unbalanced and tilted relationship with underdeveloped and developing nations?

There is an endless list of why’s. But Nigerians are witnesses to their state governors always crying that their monthly revenue allocation is never enough because at source is deducted debt owed by previous administrations. And this situation has left many in abysmal and spiral conditions of never having enough and always scraping. The result is that public service is poor or non-existent. Sometime ago, an Abia State Assembly member called for action regarding state debt owed by the state. The assemblyman Mathew Ibe sponsored motion to take legal action because according to him, the state is suffering because it only collects about N500 million monthly to run its affairs after deduction at source. At such level, it is hard to meet the expectations and obligations of running a viable state.

So why the debt and must nations honor debt that they have no basis in establishing its original intent and verifying why it was borrowed in the first place?

This is a public policy issue as well as political one. The Iraqi situation is lightening discussions in many treasury departments the world over. What if Jim Baker concludes that debt incurred by Iraqi former administration should be waived and forgiven because it was not intended for public common good. Would that elicit requests by other nations to have their debt thrown out? Is the world about to embark on massive debt forgiveness scenario and getting everyone started on a fresh foot?

Short on recommending draconian steps, I am of the opinion that local debt especially those incurred by state governments in Nigeria needs to be declined by the citizens of that state in a mass class action law suit. Such a move will get the attention of the federal government and the feds in turn will be forced to disclose how the money was borrowed, who borrowed and on what projects. The feds will then carry forward such attention to the world agencies.

Until citizens whose lives are unduly marginalized by actions of their leaders take steps to question their intents, they will forever remain in poverty. And if a regime was found to have engaged in illegal conducts, the people should have the right to deny and decline paying back any debt that may have been incurred without their knowledge.

Why must any country be held accountable for debt that resulted in buying weapons used to oppress them? Can one knowingly seek resources to buy weapon of mass destruction such as heavy debt? National debt is a weapon of mass destruction and if its original intent was not for the common good of the people, the lender and the borrower must bite the bullet. The debate on this issue has just started and Iraq may be offering the rest of the world something else to look forward to. What is good for the goose in this case may very well be great for the gander.