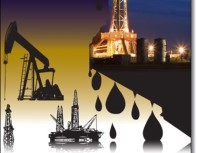 With all the dance in the square about oil in Ghana, Kenya and Uganda, it is worthy to note the total daily output is less than 10,000 barrels per day, that is what a group of private/individual producers do in Texas and no one says a word. But for an entire African country marooned on laziness and wishing for ‘manna from heaven,’ they erroneously by default and design, believe God just rewarded them.

Africans celebrate ‘unearned income,’ placing too much emphasis on natural resources while not developing their mental capacity to deal with the expected Politics of Business that determines who gets what. They are consumed with/by tribal wars and overload their exercise with Business of Politics while active and errand foreigners steal and cart away resources right under their nose, aided of course, by the African. It is a thief on the inside to encourage the outsider to strike and be successful. Africans cannot absolve themselves of the responsibilities of squandering their natural resources for a dime, colluding, cooperating and collaborating with foreign interest for lousy promise of some reward.

Take a trip to any museum in Africa and cry. Why? Errand Africans have sold and or given away or have participated unrestricted and willingly and readily smuggled their national treasures for pittance to foreigners who offer them nothing. And this is while the museum curator is a western educated African who is happy parading degrees before his ignorant people but spineless before foreigners.

The discovery of oil impresses naïve Africans. They celebrate and dance that God has buttered bread for them, only for them to see their poverty deepen. The only refinery in Kenya is about to be shut down because it is aged and does not have enough crude to refine. That is the only refinery in East Africa. Yet, silly and marooned Africans run around the world dancing and singing that Africa is rising.

Rising for who and to what? It is hard to see any business in Africa borrow money for business and economic development at interest rate in single digit. Those that do, the corrupt and stealing public officials appointed and or elected, do not pay back and see loans made to them as ‘godsend gifts.’

There you have it: One stealing from themselves but expecting to do better. Really?